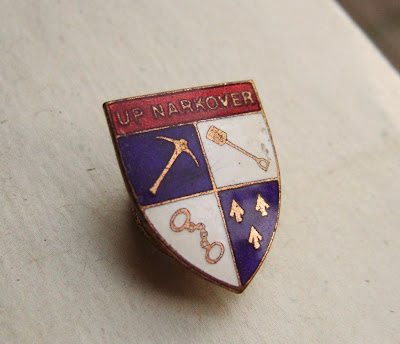 At first glance, this is just an old enamel school lapel badge, with the school motto at the top - 'Up Narkover'.  However, if, like me, you're a fan of old British comedy films, you'll know that Narkover School was where Will Hay's schoolmaster character taught, in the film 'Boys Will Be Boys'. The symbols on the badge - a pick and shovel, handcuffs and prison uniform arrows - denote the sort of future Narkover boys were likely to have. Some of the schoolmaster humour is dated now, but I really like the cheerful anarchy of Will Hay's films. ('Oh Mr Porter' is a classic.)

When I first found one of these badges, I was very puzzled as to what it might be. A promotional item for the film, perhaps? Later, I discovered that these badges were used by Will Hay to raise money for charity. I would love to think that my badge might have been handed out by Will Hay himself, but there are so many of them around, I think that's pretty unlikely. An obscure bit of memorabilia, but one that pleases me very much.
Posted by Kitsch and Curious at 09:37