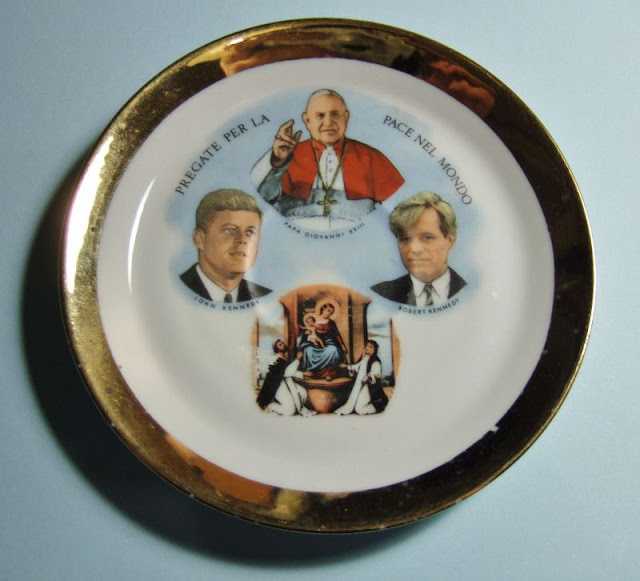 I'm somewhat baffled by this plate. 'Pregate per la Pace del Mondo' apparently means 'Pray for World Peace'. But who should you be praying to? The Virgin Mary, the Pope, Bobby Kennedy or JFK?
I've done a little interweb checking and there are a few variations of this plate about, with the Pope and the Kennedys. But why? I can only guess that, for American Catholics in the 1960s, the Kennedys were second only to the Pope as heroes/role models/God's representatives on Earth and so they deserved equal souvenir plate space.
Pope John XXIII died in June 1963, so was this produced when they were all still alive? To further confuse things, although the words are in Italian, the plate was made in Bavaria. And although I keep referring to it as a plate, it's actually a saucer. Maybe there was a whole tea service?
Posted by Kitsch and Curious at 09:27

I have a version of this plate with St. Anthony (patron saint of lost things / "people who have been lost". with St. Anthony to round out the four-part image, I interpreted it to commemorate the three of them, who were all dead by 1968.