As it's the Fourth of July, I'm very pleased to introduce a guest blogger from the States. Eartha Kitsch lives in Nashville, but I first 'met' her on Flickr, where her photos and her writing captivated me immediately. Now she also has a fabulous blog, Ranch Dressing with Eartha Kitsch, where you can see both her beautiful home, and some of her very odd vintage finds. Like this one... 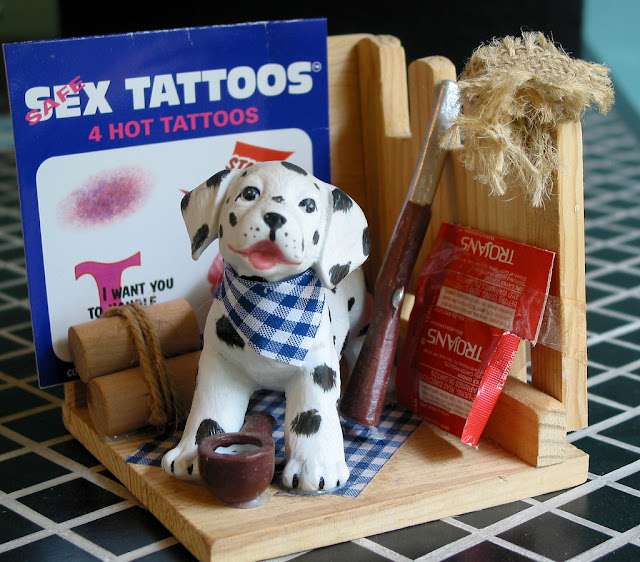 The Mister and I found this creation in a box lot of fascinating goodies that was given to us. We have no idea where it came from originally or what on Earth the mysterious Jamie Potts who made it was thinking! Well, it's obvious that he was thinking about sex but the way that he expressed it is a perplexing combination of shadow box vignette and cryptic dirty limerick.

On the front of the piece you see an innocent dalmatian in a natty kerchief. The items around him are what make this so puzzling. They are:

From what the creator, Jamie wrote on the back, it sounds like a bug may be missing from this scenario. Not that the missing clue would help it make any more sense! Here is what is scrawled on the back:

Hat - gonna get caught
Dog - the man
.... - ready to eat
Bowl - the woman
Bug - something humming around
Logs - heat gets stirred up
Shotgun - if daddy catches you
Trojans - safe sex
Sex tattoos - put and lick

There you have it! I'm not sure if this was made for some steam-of-consciousness art class or if he made it to woo a suitor. I'm hoping that it's the wooing one because it makes me laugh so hard to think of what the intended sweetheart who received this must have thought.

Jamie Potts, I don't know who or where you are but I'd like to thank you for giving me the giggle fits and question marks over my head. Also, thanks for the eight year old condom.

Posted by Kitsch and Curious at 10:00

Thanks for letting me share this..craziness. : ) I have rendered your readers speechless. I think that Jamie would be pleased. : D

i have no words. this is something i would have snatched up at a sale if i saw it. that is pure poetry mr jamie potts!