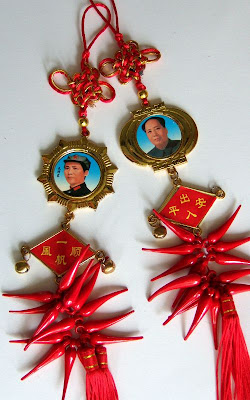 Although I don't exactly believe in luck*, I am always drawn to lucky charms of all kinds. The whole idea of talismans, amulets, or just a simple lucky object is fascinating. And they are usually visually interesting too. So I end up collecting all sorts of lucky objects.

I don't know much about these Chinese charms, except that red is considered a lucky colour, and so the chillis are lucky by association.  And presumably, by the same token, Mao and his little red book were also lucky. 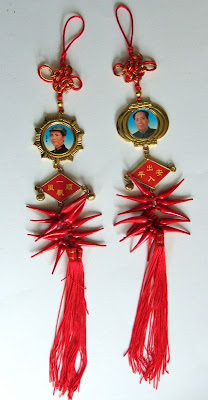 Each charm has a picture of Mao on one side, and then another portrait on the other side, presumably of some hero or official of the Communist Party. I'm not too familiar with the heroes of the People's Liberation Army and the like. (After a quick bit of research, I think one or both of them could be Zhou Enlai?) It doesn't really matter who it is, there's just something a bit bonkers about having a lucky Communist Party mascot, isn't there? 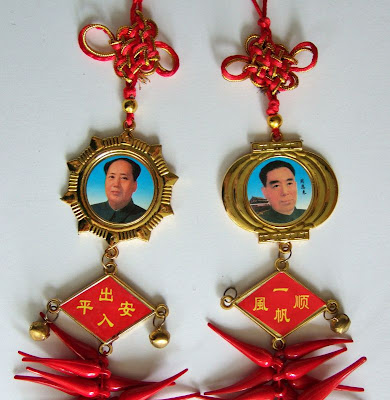 * What I mean by that, is that, although﻿ I don't believe that certain things are lucky, I still find myself 'touching wood' or feeling I should buy a lottery ticket if I'm having a 'lucky' day. Does that make sense? Not really.
Posted by Kitsch and Curious at 10:00