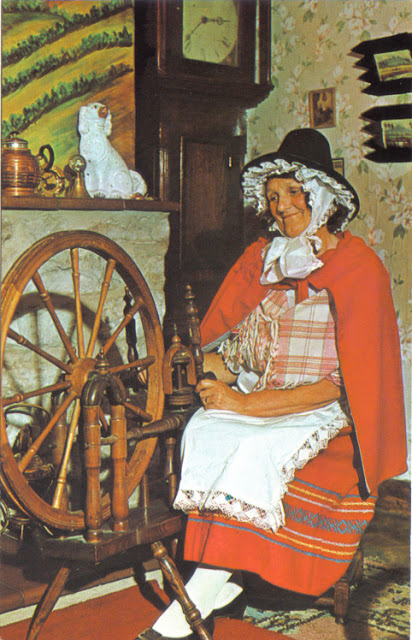 I really should have posted something Welsh yesterday, to mark St. David's Day, but I'll try to compensate with some Welsh postcards today. I am the only member of  my family to be born outside of Wales, and despite my mother's lifelong conviction that everything in Wales was better than anything in England, I've never lived there and don't really consider myself to be Welsh. It's lovely for holidays and I hanker for a nice bit of Welsh tweed occasionally, but that's about it.
However, Welsh costume is tied up with memories of kitsch souvenirs of childhood holidays, and also now with my fascination with costumes and costume dolls. So vintage Welsh lady postcards are pretty irresistible.
Here are a couple to enjoy. The poor gormless woman in the top picture has been told to look as though she might be doing something with that spinning wheel, despite there being no wool on it.
And in the bottom picture, we have a bevy of Welsh children. Not just girls,mind. As if it wasn't humiliating enough for the girls to be shoved into tweed and lace and black hats, young Master Taffy has been forced to wear a ludicrous version of a 'traditional' costume. Is he wearing a kilt? We really shouldn't be looking. But the rest of it is like some 1960s wedding pageboy outfit, with the frilly-fronted shirt and bow tie. All topped off with a hat that looks more like a beefeaters or flamenco dancers. Ridiculous! As we all know, the traditional Welsh male attire should be a rugby shirt... 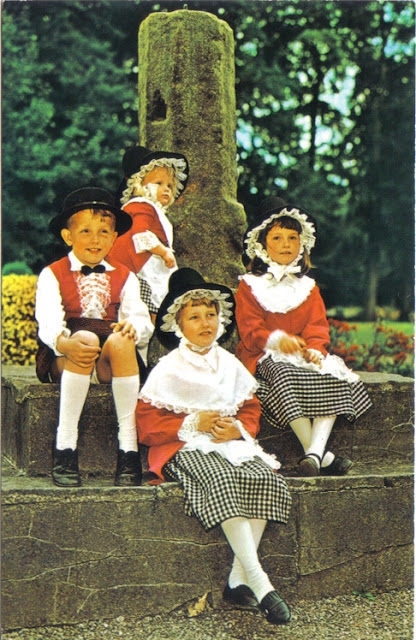 (You can look here if you want to see what the real traditional Welsh costume for boys should be.)
Posted by Kitsch and Curious at 09:31