Before there was Toby Maguire 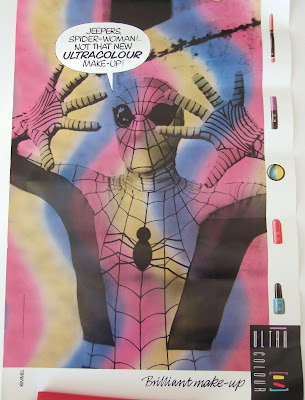 I'm afraid there's no 'Curious Friend' this week (just call me Betty No-Mates), as very few people seem to have the sort of weird collections that I have. Funny, that. But if you have an odd object you'd like to share, please get in touch via my profile.

However, today's object does belong to someone else, but only because I ebayed it some time ago, so it's no longer in my possession. It's a poster from 1987 advertising Rimmel make-up. And for some strange reason, they decided to use a picture of Spiderman. A black and white picture overlaid with wavy bands of colour, presumably supposed to depict the amazing effect of Rimmel's 'Ultracolour' make-up. I think what it really depicts is a pretty cheap advertising budget, but let's not be too harsh.

Judging from the wrinkly costume, I think this is a still from the 1970s TV series of Spiderman. (I thought that was where the theme tune 'Spiderman, Spiderman, Does whatever a spider can!' etc. came from, but I now discover that was the cartoon. You can see both opening themes here.)

Not only was the TV series made before there was CGI, I think it was made before there was Lycra, so poor Spidey never looked quite right in his costume. Nor did he have the same muscles as the Toby Maguire version. So quite why they thought he would appeal to the buyers of Rimmel make-up, I'm not sure. I think the overlap of make-up customers and Spiderman fans would have been pretty small back then. Basically, it was just me.
Posted by Kitsch and Curious at 09:00

I think this is even weirder for dating from 1987, which isn't really THAT long ago, and yet it looks as naive and misguided as something from the 50s. Maybe they were trying to be retro and ironic, but retro and ironic didn't start till, oh, around 1995, did it?? (I don't think I really have any idea what I'm talking about...)