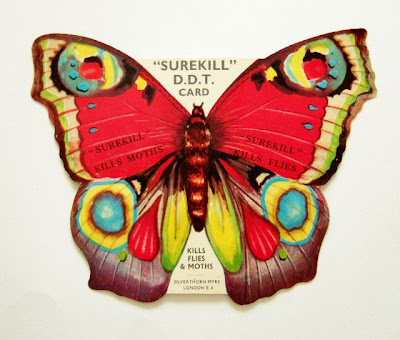 It is just a thin piece of card, about 5 or 6 inches across, which presumably was impregnated with DDT. DDT was banned in most countries in the 1970s, but not until 1984 in the UK. I have had this card for years, and have always assumed that it was so old that there could be no trace of poison in it. However, writing this post has made me look up the information on DDT, and I am now slightly worried about having this thing lying around the place. I think I might just go and put it in a plastic bag...
Posted by Kitsch and Curious at 09:30

But it's so pretty! A few of these would make a lovely little mobile... I daren't look up DDT myself as I would no doubt immediately become paranoid about one more thing...

(The words I have to type today to prove I'm not a robot are 'Yessible, offither' which sounds like something you'd mumble when arrested for drink driving)

I was struck how beautiful this is as an object but how lethal it is. I can remember as a child that DDT powder would be puffed onto wasps nests in my granny's loft and then I would watch horrified as one by one they would struggle out covered in it.