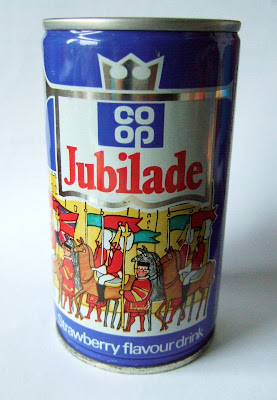 I make no apology for another appearance of my famous can of Jubilade. If you follow my Kitsch and Curious blog, you will already know the story of how it came to be featured in a Diamond Jubilee exhibition in London.

As well as the BBC website, and The Evening Standard, it has also appeared in Time Out, and the Guardian website. I also got a query about it appearing in the Sunday Mail Live magazine, but I don't know if that happened. This little pop can took on a life of its own.

The exhibition ended on Sunday, and the curator, Josh Knowles brought my motley collection back to me this week. But there was a wonderful surprise for me. He had got the can signed by Sir Peter Blake, no less! 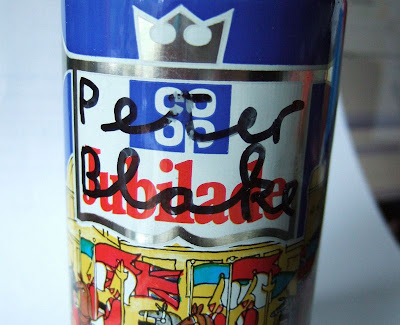 When Josh picked up the Jubilee stuff from me, we had had a short conversation about collecting and the work of Peter Blake. Josh had been at the Art Car Boot Fair alongside Peter Blake, and I was pretty envious of that.

Being the lovely guy he is, Josh remembered that, and when he met up with Peter Blake again, at a radio interview about the Jubilee exhibition, he took my can along to get it signed. How bloody brilliant is that?
Posted by Kitsch and Curious at 10:00

Absolutely can-tastic (pardon the pun). How lovely to get PB's signature too!

That's amazing. I had a fleeting thought of: 'But what if you didn't want your special collector's item signed in pen' but then it was swiftly overwhelmed by, 'Coo, Peter Blake's signature!'. Does that make the can a Peter Blake work now?? Amazing that your can has been featured so widely, too.