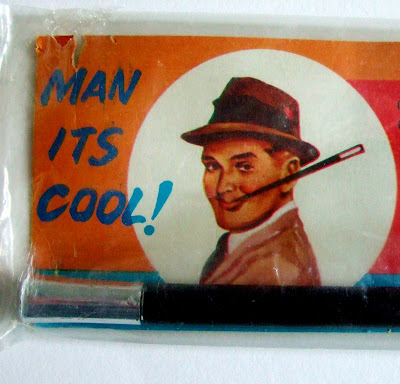 Not even able to spell 'Beatnik', the makers of this novelty item clearly have no idea what a beatnik looks like, either. A beret and a black polo neck sweater would have been more to the point, rather than that Madison Avenue square on the packet.

And did beatniks even use cigarette holders? Was it cool to smoke your Gauloises through 14 inches of plastic pipe? Whatever the case, I don't think this absurdly long holder was ever really cool. They can't even get the simplest bit of hipster talk right...

'Away out'?  Not surprising, as that woman looks more like Katie Boyle than a beatnik. Or even a beatnick.

I have had this... toy? for 30 years, and I think it's one of my all-time favourite things. Partly because of the whole insane concept, partly because the packet is both good and bad at the same time, and partly because it was one of the things that started off my 'toys in packets' collection.

Back in the 1980s, you could find quite a lot of stuff still being sold in the same packaging they had used in the 1960s. Joke shop novelties in particular. I wish I'd bought more at the time, but couldn't afford it.

But astonishingly, this one is still available in exactly the same packaging. I feel a bit cheated, having kept mine for thirty years. (They still can't spell 'beatnik', though.)

Posted by Kitsch and Curious at 14:28

Oh yes, this one is right up there. Fantastic. And how weird that you can still buy them. I agree that's a little annoying. I wonder if they're newly minted or thirty years old and still sitting in the warehouse? Yours is fab, anyway. One of my faves, definitely.
(I'm just catching up on your blog after hiatus -- been slacking)

I have one of these that is thirty years also. I wild about all of your wacky collections.