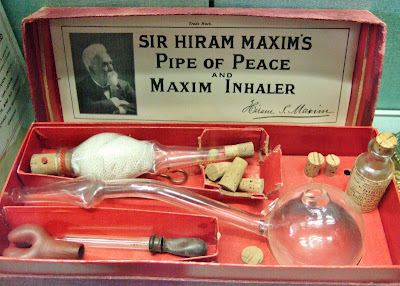 This wonderful-looking contraption caught my eye in Stroud Museum last year. Its vaguely bong-like appearance, and elaborate name were enough to intrigue me, and I took this photo. Later on, when I posted it on Flickr, someone suggested this must be the same Sir Hiram Maxim, who created a tethered flying machine, even before the Wright Brothers.

I had never heard of him, so I looked him up, and discovered he was quite an inventor. Probably his most successful invention was the first portable automatic machine gun. Wikipedia says he also invented "a curling iron, an apparatus for demagnetizing watches, magno-electric machines, devices to prevent the rolling of ships, eyelet and riveting machines, aircraft artillery, an aerial torpedo gun, coffee substitutes, and various oil, steam, and gas engines".

His flying machine experiments resulted in a steam-powered flying machine, which was tested on rails in 1894. It sounds like a steampunk dream. It rose in the air, but was tethered for the experiment, so that it could be controlled. Unfortunately, it was probably not a viable design, as Sir Hiram gave up work on it.

In 1904, he tried to promote his investigation into flight by creating an amusement ride -"Sir Hiram Maxim's Captive Flying Machines". This was the sort of ride you still see today, with 'aeroplanes' flying outward from a central spinning rig. Despite the popularity of the ride, Sir Hiram lost interest, because he was not allowed to give the machines their own flying controls.

Amazingly, there is still one of these original rides working at Blackpool Pleasure Beach today. You can see it here. It's certainly a tribute to the man, that his invention is still being used, over 100 years later.

Unsurprisingly, the same cannot be said of the scary-looking 'Pipe of Peace', which he devised to relieve his bronchitis.
Posted by Kitsch and Curious at 10:30