Your Own Polaris Nuclear Sub! 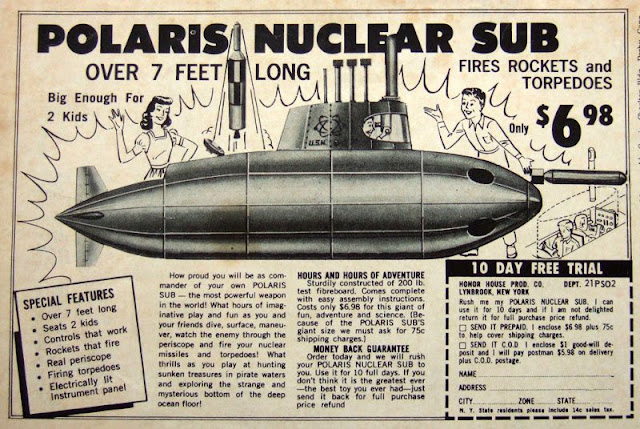 I really, really wish I could send off for one of these. What on earth did you get when you bought a Polaris Nuclear Submarine for less than $7?

Well, according to the advert, "the most powerful weapon in the world!" and  "a giant of fun, adventure and science". Crikey!

Like last week's Atomic Age Rifle, this is another of those ads that used to appear regularly in American comics of the 1960s. You can only gasp at the sheer exploitation and blatant misinformation in this ad aimed at children. "What hours of imaginative play and fun as you and your friends dive, surface, maneuver, watch the enemy through the periscope and fire your nuclear missiles and torpedoes! What thrills as you play at hunting sunken treasures in pirate waters and exploring the strange and mysterious bottom of the deep ocean floor!".

Obviously, the key word here is imaginative. Yes kids, you will only do those things in your imagination. In reality, you will be sitting in a cardboard box. Because I think that's what they mean when they say it's "sturdily constructed of 200lb fibreboard".
That's a heck of a lot of imagination...