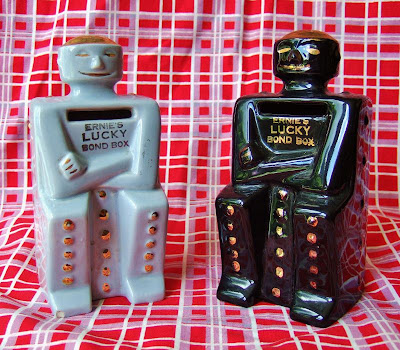 These ceramic ERNIE money boxes seem to have something of the stone idol about them. I can imagine offering them sacrifices in the hope of getting a good win on the Premium Bonds. I'm not sure what a robotic god would like as a sacrifice - some nuts and bolts and a giant size can of WD40, perhaps?

Well, I may make that experiment later, as I could certainly do with a million pound win right now, but as we only have an ancient £5 in Premium Bonds left, I doubt if we stand much chance.

I can't actually remember how I managed to acquire two of these beauties, but as I love retro robots and vintage ceramics, it's hardly surprising. You see quite a few of these around at vintage fairs and the like, so they must have made thousands of them. I imagine they were issued by the Post Office themselves - a little robot army, trying to collect up everyone's cash.

As you probably know, ERNIE (Electronic Random Number Indicating Equipment) was first used in 1957 to pick the winning Premium Bond numbers. I think it's rather endearing that Ernie was anthropomorphised to such an extent. According to the Premium Bond website, he receives Christmas and Valentine's cards. I imagine they are mostly from the executives of NS&I, thankful they are still in a job.
Posted by Kitsch and Curious at 14:27