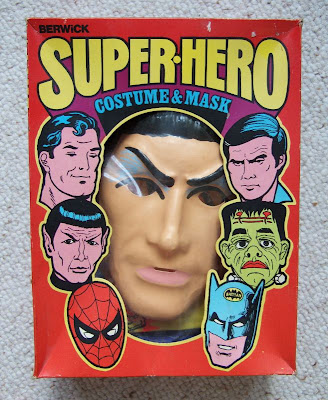 I pity the poor child who got given this Spock costume. Let's just gloss over the fact that it says 'Super Hero' on the packet, it's definitely meant to be Mr Spock. So you get a promisingly large box which contains a costume and mask.
OK, I can see the mask is not perfect, but it's got pointy eyebrows and ears, that's the main thing. Even if you're not a Star Trek fan, you'll know what Mr Spock looks like, and it looks passable. However, even if you've never seen an episode of Star Trek in your life, you will know that his Star Fleet uniform does not look like this - 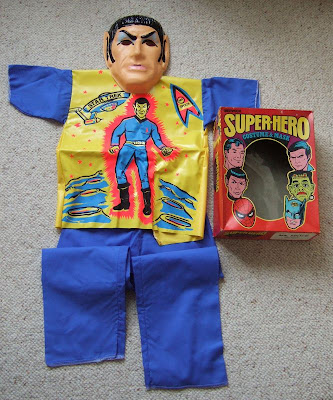 No, Mr Spock does not go around wearing a picture of himself on a bright yellow plastic tabard affair. Nor does he wear cheap blue nylon trousers.
It just doesn't make any sense. If they can draw a picture of Mr Spock wearing a plain blue top and print it on the costume, why didn't they just make the costume like the picture? Of course, if they had, we would have missed out on this rather fine piece of artwork, which shows that angry Mr Spock has either eaten his Ready Brek or is being electrocuted. 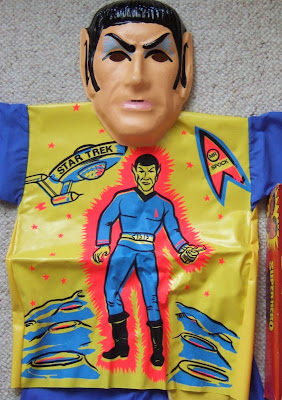 Posted by Kitsch and Curious at 09:49

It's just wrong on so many levels, isn't it -- and I don't like to picture the factory it was made in either! Once again you spoil us with your kitsch curiosity.