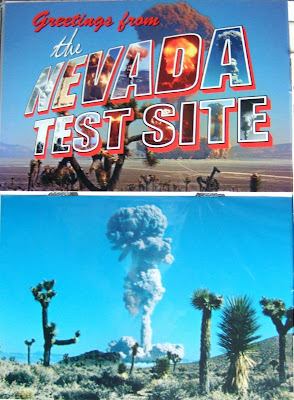 These postcards from Las Vegas are not actually vintage, but the photos on them are. They show some of the atomic test explosions that took place in the Nevada desert just 75 miles from Las Vegas.
I got them from the wonderful Atomic Testing Museum in Vegas, a place where the interactive fun for children includes a chance to use a Geiger counter on vintage picnicware (yes, it's radioactive!). There is also a short film, which is shown to you in a sealed room. When the explosion happens, air gets blown in your face. Boy, did that make me jump!
Anyhow, in the 1950s, the mushroom clouds could be seen from Las Vegas. In true Vegas style, they just saw it as another show business opportunity, and tourists were encouraged to come and view the explosions!
(Perhaps even more shocking is the fact that the nuclear tests went on until 1992, although by then the explosions were underground.)
Posted by Kitsch and Curious at 09:19