This week's blog will be all Las Vegas related objects. 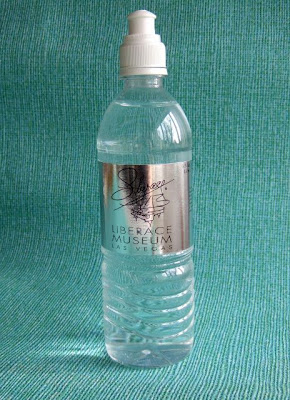 Ah, Liberace, king of kitsch! One of the places that we had to visit when we went to Las Vegas was the Liberace Museum. Rather immodestly, Liberace set up the museum himself. But to be fair, the idea was to raise money for the Liberace Foundation to help with music education and training.
Sadly, the museum is now closed, due to financial problems. I suppose his fan base is dwindling. Certainly when we went, we were probably the youngest visitors there. Such a shame, as the museum had such spectacular treasures as a Rolls Royce encrusted like a mirroball, the world's largest rhinestone, and fabulous, fabulous costumes and jewellery. The building itself is a kitsch masterpiece too.

We got a few souvenirs from the museum, but I think one of the most curious, or random, is the mineral water bottle. Water from the Sierra Nevada, bottled exclusively in the name of Liberace. I have to admit, I was quite unreasonably excited when I got this. It's only Liberace Water!! 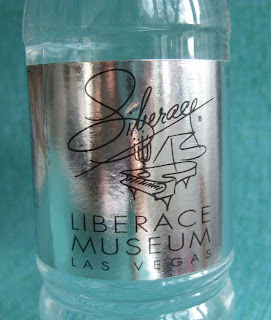 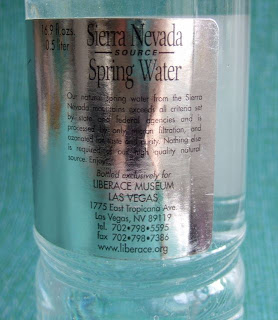