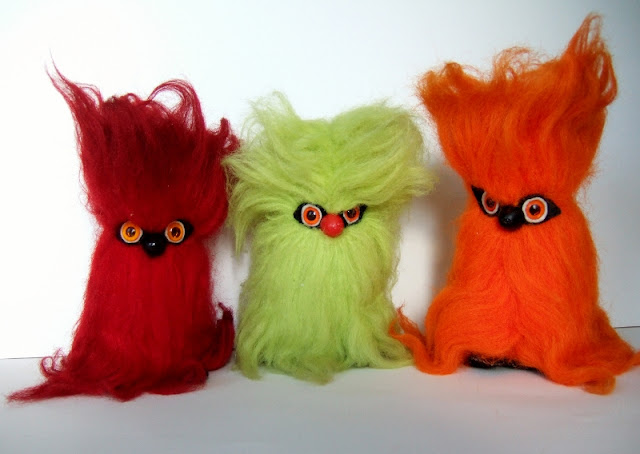 Do you remember gonks? If you were young in the 1960s or 1970s you probably had some sort of gonk. There was nearly always a gonk on the contestants' desks on University Challenge (or was it Top of the Form?).  I remember the one I had very distinctly. It had pink fur, orange eyes and black feet made out of a sort of plastic-coated wire.

It was a pretty good marketing idea - stick googly eyes on some fake fur and sell it as a toy. These two are even cheaper - with feet and faces made of cardboard. 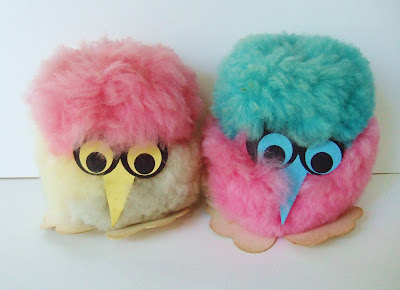 These ones with 'beaks' are reminiscent of  Tivvy, the TV Times mascot, who in turn is reminiscent of a Finnish Fauni troll. I bet you didn't know there were so many varieties.
In a mood of vigorous enquiry, I decided to throroughly investigate the origin of gonks. Well, I googled it, anyway. Turns out that, officially, these are not Gonks at all, but Glooks. Gonks were a different sort of toy, like Humpty Dumpty with a Beatle cut. And, rather marvellously, there was a film called 'Gonks Go Beat' made in 1965. 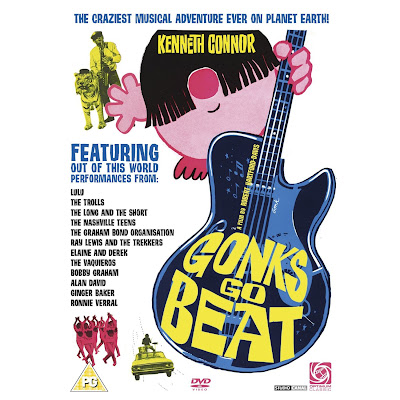 You can even buy it on Amazon. I'm a little bit tempted now...

Posted by Kitsch and Curious at 09:39

Ahhh Gonks! I knew the word but it wasn't until I read your post that I remembered what they were. I had a Gonk (suppose I should say Glook) it was hot pink and my sister had a fluro lime green one.
Thanks for the memories x

I need a gonk or glook for my lovebird to make love to!
We had one--little puffy thing, googly eyes, antennas off the top, with sticky feet--and our bird, Randolph, well, loved it. to pieces. Do you know where i can find a Gonk? He's turning ten and I want to get him a lover. yes, this all sounds weird to me too, but it is also the truth. The things that become your life.

A blast from the past! Brought back memories. My mum used to sew up 'Glooks' and I used to take them to school and sell them for half a crown. Quite a little enterprise for a short time.
Happy memories ;0)