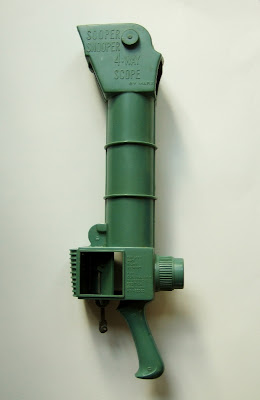 The 'Sooper Snooper 4-Way Scope' was launched in the 1960s, and was one of those toys that promised so much more than it delivered. Essentially just a simple periscope, it had the addition of a swivelling mirror that allowed you to look to the right and left. Correct me if I'm wrong, but that could have been achieved just as easily by turning your head, surely?

My brothers had one of these, and apart from learning what a periscope was, I don't remember there being much to be gained from playing with it. However, the adverts for these and other periscopes always showed an amazing amount of fun to be had by being able to see round corners or over the top of high fences. It could turn you in a submarine captain or James Bond or soldier in a trench or... well anyone who wanted to look round corners or over high fences. 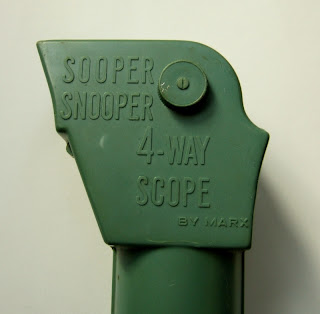 I couldn't find an ad for the Sooper Snooper, but it looks like it was rebranded as the 'RamJet 4-Way Scope'. The advert makes it look pretty fearsome!
Posted by Kitsch and Curious at 14:29

Awesome advert! I used to be obsessed with periscopes as a kid but usually had to make my own with a makeup mirror and a box -- not nearly as good as this one. I still want one of those!