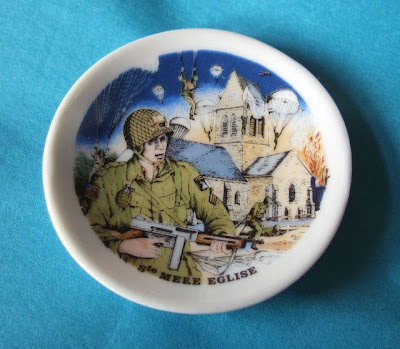 I got this miniature souvenir plate from the Normandy town of Sainte-Mère-Église about 10 years ago. At the time I was surprised by how much World War II was part of the tourist industry there. Nowhere more so than the little town of Sainte Mere Eglise.  When we arrived there, we were amazed to discover this.

Yes, it's a life size dummy of a paratrooper hanging from the church tower. Apparently this incident really happened to an American paratrooper in the D-Day operations in 1944 (he played dead and was left hanging there for hours), and it was portrayed in the film The Longest Day. It seems a bizarre kind of memorial.
I can understand that they still get war veterans and their families touring the area, and so there is a demand for maps and guides of the battlefields, memorials and cemeteries. But souvenirs with soldiers on? Well, yes, I bought one, but purely because I was attracted to the sheer oddness of it. I'm still not sure I really understand its appeal to any normal person. Or maybe it's a boys' thing?
Posted by Kitsch and Curious at 09:33